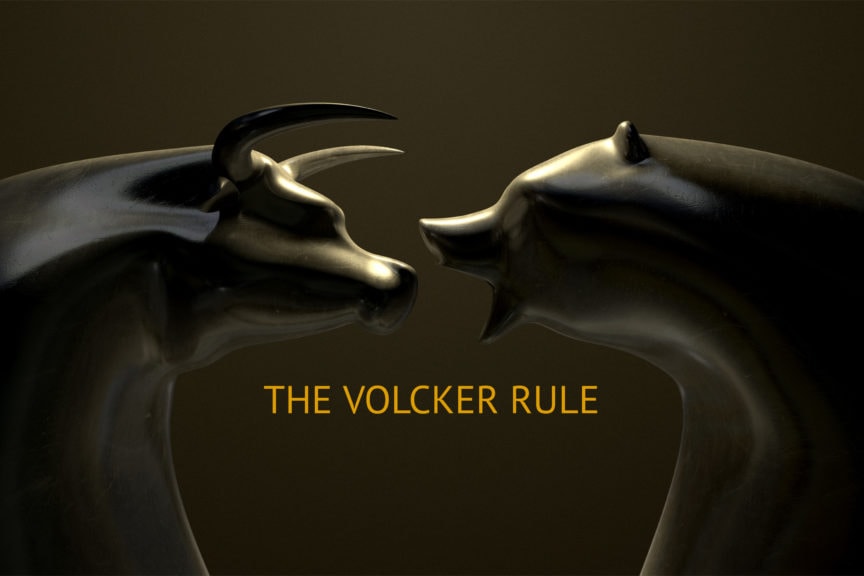 During the rule’s drafting and following its implementation, the Volcker Rule has been subject to criticism on many levels which include reducing market liquidity, ambiguous rules which banks must interpret, increasing operational costs for banks to ensure compliance and reducing the competitiveness of the US financial sector. After several years of criticism, initial steps have been taken to make amendments through submission of comments to the Office of the Comptroller of the Currency (“OCC”). This activity ended on 21st September 2017. This blog seeks to clarify the potential changes to the rule.

What is the Volcker Rule?

The main purpose of the rule is to prevent banks from engaging in short-term proprietary trading, i.e. trading with the banks’ balance sheet, and restricting owning, sponsoring, or having certain relationships with hedge funds or private equity funds. These activities entail substantial risks as they are essentially speculative in nature: buying and selling securities, in the expectation of profits from changing market prices. The rule was introduced as part of the Dodd-Frank Act in 2010 with the intention of curbing the amount of risk undertaken by banks, reducing the risk of large trading losses that were endured on an international scale during the financial crisis. The rule also seeks to reduce the potential conflicts of interest between dealers and institutional investors, whereby banks may be incentivised to enrich their proprietary accounts at the expense of their customers’ investments.

What are the Proposals?

Rather than repeal the rule outright, the recommendation coming from regulators such as the OCC has been to modify the rule so that its original purpose is served whilst reducing the burden that banks endure whilst implementing it. In its first of a series of reports to the President, the U.S. Treasury Department has issued a series of improvements to the design and application of the rule[1]. It is likely these recommendations will serve as a starting point, with the submission of comments to the OCC providing additional granularity:

Simplify the Definition of Proprietary Trading

One of the main criticisms of the rule is the lack of clarity it provides to distinguish between proprietary trading and market making. There are three proprietary trading tests. Two of which are linked to objective calculations, the “Market Risk Capital Rule” and “Status” tests. Under the third rule, the “Purpose Test”, banks are required to make a subjective assessment of the traders’ intent. On this test, CEO of JP Morgan, Jamie Dimon, famously joked that “you have to have a lawyer and a psychiatrist sitting next to you determining what was your intent every time you did something.”

The Treasury report makes two recommendations (1) to remove the 60-day rebuttable presumption that any trade held for under 60 days constitutes proprietary trading (2) the consideration of revising or removing the purpose test altogether.

The rule includes exemptions for banks to engage in non-speculative risk hedging transactions for interest rate, credit and other risks that are part of standard business practice. However, due to the onerous amounts of compliance to prove the purpose of the trade and maintain ongoing calibration of hedging trades over time, it can often be too costly to execute these trades. As such, banks have often ended up taking on more risk than they would have without the rule, raising the risk profile of the bank. The Treasury has suggested a simplified approach, where banks are ultimately responsible for monitoring and taking reasonable action to mitigate material risks.

In 2014, the OCC estimated the compliance costs stemming from the implementation of the rule could amount to as much as $4.3 billion USD. A non-trivial portion of this cost has been due to the extensive reporting, requiring 7 metrics to be reported daily. The Treasury proposes that banks should be able to report only on the metrics that are relevant to their activities and risk profiles. In doing so, banks will be able to reduce their compliance burden whilst still reporting in the areas that pose the greatest risk.

The Treasury seek to give banking entities additional flexibility to determine a reasonable amount of market-making inventory. The recommendations also suggest that policy makers consider banks’ abilities to opt out of the reasonable expected near-term demand (“the RENTD”) if the bank is fully hedged against all significant risks arising from its inventory of that instrument.

The rule’s restrictions on covered funds are designed to protect against conflicts of interest and prevent banks engaging in indirect proprietary trading through its funds. The rule currently defines covered funds through the analysis based on the Investment Company Act, which is criticised for being overbroad and creating a significant legal burden, as banks are required to perform detailed analysis to define a covered fund. The report suggests that regulators should adopt a simple, more practical definition, focusing on the characteristics of hedge funds and private equity funds, whilst applying appropriate exemptions.

Exempting Smaller Institutions from the Rule

The application of the rule in small banking entities has created additional regulatory burden whilst offering limited benefit, as the failure of these institutions would not pose a significant risk to the financial system. Instead, these lower risk banks can be monitored through less cumbersome prudential regulation and supervision.

Most small banks do not engage in the kinds of activity that the rule prevents. However, they are still required to comply with the rules and prove that the purpose of their trading activity is for hedging, which is permitted by the rule. As such, the Treasury Report postulates two criteria for exemption from the rule: (1) Banks with $10 billion or less in assets (2) Banks with over $10 billion in assets, with less than $1 billion in trading assets and liabilities, and whose trading assets and liabilities represent 10% or less of total assets.

The Treasury proposes that for bank’s that are sufficiently well-capitalised the burdens of complying with the rule are not required. This is because the risks posed by engaging in proprietary trading would be able to be absorbed by the bank’s balance sheet. The report adds that an institution that opts out of the rule altogether would remain subject to trader mandates and ongoing supervision to reduce risks to the safety net.

What’s Next for the Volcker Rule?

The rule can only be rewritten jointly by the five U.S. regulatory agencies in charge of defining and enforcing the rule. There is increasing coverage in the media that suggests that there is support from the regulators to achieve this, however, given the original rule took more than three years to finish, agreeing on any revisions will be a time-consuming activity. It is worth noting that many of the proposals in the Treasury’s report will not require formal congressional approval, such as changing the definition of what constitutes proprietary trading. Naturally in such cases, it will be easier for changes to the rule to be implemented.

Along with the proposed revisions to the Volcker Rule that have been outlined in this blog, the U.S. Treasury Department have suggested over 100 possible changes to rules put in place after the 2008 financial crisis. Most of these recommendations can be accomplished directly by regulators and without formal legislative change by Congress. As a practitioner-led consultancy with a proven track record in managing complex regulatory change programmes in the largest investment banks, New Link Consulting is uniquely placed to offer its expertise when revisions to regulations such as the Volker Rule materialise. Leveraging a wide range of consulting methodologies and tool-kits, New Link Consulting can provide a customised offering for each project, driven by its unique requirements, to deliver the desired outcome.